The plan has always been to mount my lights inside of my tank after my hoods were damaged in the fire. The first step was replacing the plexiglass lids with nice thick tempered glass lids. The second step was finding the proper lights.  I found a combo hood with a UVB 5.0 bulb and as well as red, white and blue LED to encourage plant growth (for sprouting seeds right in the tank). This Reptisun LED UVB Terrarium Hood 14 inch was the perfect fit!

The third step was to mount the lids. I used strong magnets to mount the light hood in my vertical tank so I planned to do that again.   I used four pairs of magnets on the new led uvb hoods but it was not strong enough and the hoods where sliding around too much. I didn’t have the same magnets as the first time but I thought these were strong which was necessary as the new hoods are heavier.

Yesterday I decided that it was time for some zip ties.  I added two loops per light hood in the photos but later I am adding two more to prevent sliding when I lift the lids. 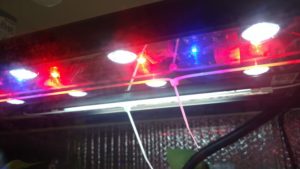 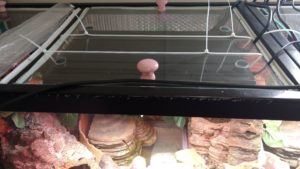