For the last 6 hours I have been watching my largest C. brevimanus (Ditto) being guarded by another brevi. They eventually moved off to a corner and despite many hours of watching the act has yet to transpire. Some of the issue seems to be that at least two other brevi in the tank are male and CURIOUS. My brevi lovers should have found a more secluded spot. :/ The male guards her and patiently waits until she is ready. A true gentleman.
And in case you are wondering, I have no intentions of trying to hatch the eggs. This is way beyond my abilities. I am excited to watch the eggs develop! 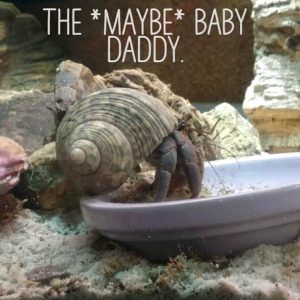 So I watched these two for about four hours last night but never witnessed the act. Two other C. brevimanus kept interrupting. Likely males. This morning they were all in the cork bark logged surrounding Ditto (female). Soon there after the would be baby daddy emerged to have some water and a bit of breakfast. I wonder if this is why the brevimanus have been so reclusive, they knew she was coming in season and are staying close to her. One of them is missing and could be molting or an uninterested female. 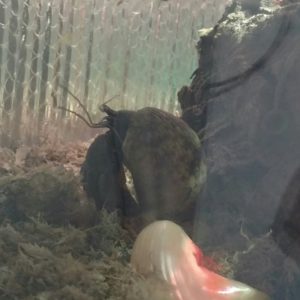 Update: 2/19/2017 For a few days after the night in question the maybe baby daddy displayed a strange behavior. He would return to the spot by the log where he was with Ditto and he assumes this strange pose with one set of antenna straight out to the side. This is the same position as when he was guarding Ditto. He might leave and eat but then he would go back.

The other interested male (not Haunter) was also clearly doing some guarding at the end of the tunnel, assuming a similar pose of MBD. After maybe 4 o 5 days of this all of the brevimanus resumed a normal activity level. As did the violascens who were also hiding in the log with Ditto.