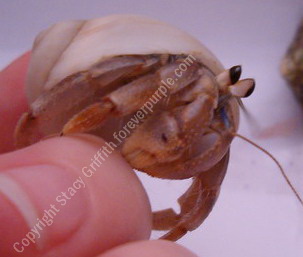 This is coming up a lot lately so it seems like a worthwhile topic to cover here.

First let me say that I understand where you are coming from when you are compelled to release your hermit crab.

That being said this is not something you should do. In most states it is illegal to release a ‘pet’ into the wild. While hermit crabs are wild caught and brought to a store I’m not sure this would get you out of trouble were you caught releasing your hermit crab. Next, only one species of hermit crab is native to the U.S. and only along the east coast. I’m actually only aware of hermit crabs in the New Jersey and Florida regions. So if you have another species that is not native to the U.S. you risk further punishment as well as disrupting the ecosystem. This may not be a high risk factor with hermit crabs but again the laws aren’t lenient based on circumstances. Hermit crabs live on the beach and if you don’t live near the east coast you will be releasing your hermit crab to a certain death.

So in summary DON’T release your hermit crab into the wild. If you feel that you absolutely MUST release it, please travel to an area where your particular hermit crab species is native and release it there. If you find yourself in trouble with the law, don’t blame me cuz I warned ya.

A much better solution is to contact Marie at The Hermit Crab Adoption Center and she will match you up with an approved adopter who will take your hermit crab.