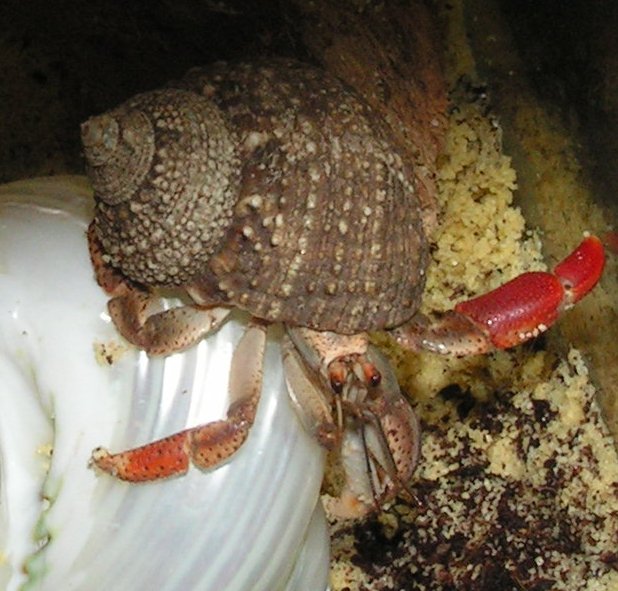 I’ve only had my hermies for a month, so I’m still a rookie. My very favorite, the fiesty, brave, friendly little baby molted last night. I found Sprout this am, laying in the food dish, upside down and drawn tight into her(?) shell, with what appeared to be her legs and claw on the outside – I thought she was dead at first, then realized she was intact inside, very pink in color. She won’t come out to see me AT ALL (she usually comes WAY out of her shell when I talk to her). I recently bought her a shell that I thought would be small enough, but it was hard to gauge at the store and now I’m afraid it’s too big. Should I separate her and the new shell from the others (I have 5 total in a 10g tank), leave her alone, turn off the lamp (I don’t have an undertank heater), or what? Right now I have her sitting on top of the salt water sponge, with the new shell nearby. Please help!! I want her to make it through, but I’m sure I have no idea what I’m doing.

Wimblee says:
You should isolate her within the main tank to protect her from the other crabs. Do not disturb her any more than normal. The way to protect her is to use a 2 liter bottle with the top and bottom cut off and push it down to the bottom of the tank so it forms a little cell around her. Light is good in a normal day/night cycle. If she fits in her current shell she won’t necessarily change just because she molted. Make sure to offer some food in case some other crab ate her exo. She is very exhausted and fragile right now so disturb her as little as possible.

Heather says:
I threw her exo in the trash, but then pulled it out to show my boys when they come home from school. I had no idea they ate it!!! So glad I asked.

Wimblee says:
Yes its very important that they eat it. It may take her a day or so to eat it though so don’t take it away